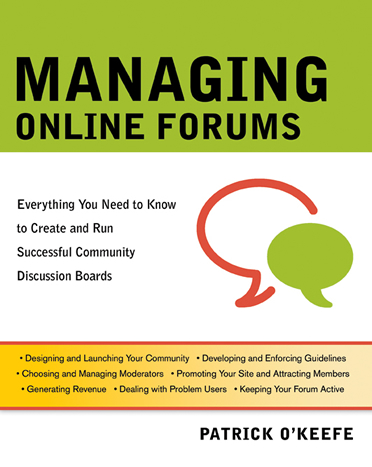 Edit: Thanks to Brad for digging this.

Now that I have had an opportunity to tell the staff members at my communities, I can announce it. I am the author of a new book called “Managing Online Forums”. It’s coming in late April/early May from AMACOM (the publishing arm of the American Management Association). It’s available for pre-order on Amazon.com.

The book is, in short, all of my community management knowledge emptied out onto pages. This isn’t hypothetical stuff – this is real, battle tested, in use theories and solutions. This is what I do and what I have done in my own communities. I cite real life examples all the way through the book. I cover everything from the development of the community and setting up an infrastructure to managing your staff and dealing with troublemakers. I went through some of this stuff so that hopefully, people who read the book will be better equipped when it happens to them. My hope is that it will be useful to both new administrators and experienced ones as no matter what you think of it, I want it to give you something to think about, if you are passionate or interested in running forums and online communities. In any case, let’s backtrack a bit so that I can explain how I got to this point.

I manage communities. It’s something I’ve done since 2000 and something that I am passionate about. In 2003, I had the idea to write a book about community management. I started by writing down ideas as far as things that I could talk about. I would literally be working on my sites and then think, “hey, that’s a good idea” and then I’d write it down. This went on for a while until I felt I had a decent list. I then organized that list into chapters. And, eventually, I wrote it out. I wanted to make sure that I had a book before I tried to find a publisher. After finishing and re-reading it a few times and adding many more things, I decided that I was ready to pitch to publishers.

Toward the end of 2004, I started pitching the idea to publishers myself, to a select group that I respected and wished to work with. To make a long story very, very short… there was some interest, some things happened, there was some disappointment and nothing worked out. So, in October of 2005, I spoke with my friend Jeremy Wright. Jeremy had just been working on his book, Blog Marketing, published by McGraw-Hill. It was a very successful project, so I asked him if he could help me, if he could introduce me to his agent. And he did. I ended up signing with the literary agent, Neil Salkind of the Salkind Agency and Studio B.

This was a great decision and I can’t thank Jeremy enough for introducing me to Neil, who has been a terrific agent. We immediately went to work on my proposal and what I could offer to publishers. He helped me fine tune it and improve it. He felt that the manuscript needed to be bulked up. It took me a few months, but I got it done and in April or May of 2006, he began to approach publishers. One of the publishers in that first run of proposals was AMACOM. We had a bite from a small publisher… and they decided against it. We had someone at a huge publisher tell us that they liked the idea, but when they looked at competing titles… they all sold badly. So, that was something else I had against me. Older books had sold poorly and even though forums had changed so very much in the 6-8 years since the books were published, I was being held to them.

So, we had a lot of nos. But, Neil continued to pitch and to follow up, as we were continually optimistic. And then, in February, Neil heard from AMACOM, from the Executive Editor’s new Editorial Assistant (I worked with her on my book) and they had interest in the project, but wanted to know what I planned to do to market it. We got that to them and didn’t hear back from a while. Neil followed up in March. In April, a full 2 and a half months after the initial interest, we heard back from the Executive Editor, as she let us know that she was discussing the book with the board. She felt the timing was right. The next day we heard back from her and she said she got the green light on the project.

Over the next week, Neil negotiated the contract with them, doing some great work. Neil was really terrific and I can’t thank him enough. I signed the deal in May and went to work on finishing up the manuscript. I sent it in, in August. An editor at AMACOM took a look and made a number of suggestions, most of which were incorporated and that’s what we worked on in September. On October 1, I turned in the new manuscript. And then the manuscript went into copy editing. I received a physical copy of the manuscript and had to review it and answer questions to make sure that everything was perfect. I did that and submitted it in November, talking with editors on various things the whole time.

I then had to review the galley copy, which is basically the manuscript all corrected and set into the book as it will appear in the finishing project. Once again, reading the whole thing and checking for any errors or typos or whatever. I did that before and over Christmas and got it in, in the first few days of January. And then we went back and forth on a few more things. And I was still reviewing portions of the book until about a week ago. The whole process is one huge period of constant communication between myself and 4-5 editors, always moving and progressing. It was really interesting to watch it evolve and watch the book improve for a first time author working with a good sized publisher.

It took a lot of hard work on the part of numerous people, but here we are. The book will be released at the end of April or the very start of May. It’s available for preorder at the biggest online book stores and, judging from AMACOM’s bookstore presence, it will be in some physical booksellers, as well. Things for me to approve and edit are getting less and less and are nearly non existent. So, now, the focus really turns to marketing, which I am very excited about and which will be a lot of fun for me. Toward that end, I’ll be launching a website dedicated to the book, as part of the iFroggy Network (but that’s not the new website I eluded to a couple weeks ago).

This is the first public word I’ve said on it. Why? Well, I really wanted to make sure it was coming out before I said anything publicly. That’s just how I am. My family even had no idea until I had a contract in hand. For the most part, the only people that I’ve told were those that were working on the book or had something (contribution, advance praise, feedback, etc.) to do with the production of it. And now, about five years after I came up with the idea, I’m finally talking about it publicly. It’s an interesting feeling to keep something to yourself for so long and then finally announce it. And I’ll now be talking about the book more and more now.

I’m very happy with how the book turned out. The editors (Jacqueline Flynn, Erika Spelman, Christina Orem, Ashley Hamilton and Jennifer Holder) at AMACOM have been terrific – absolutely terrific. They are top notch people and I’ve really enjoyed working with them. I’m really glad that AMACOM ended up being the one to publish the book. Jacquie was the one that believed in the idea and I’m grateful for that. I appreciate the chance they are taking and the opportunity that I have been given. I’m confident that the book will be a successful project for everyone and I’m determined to work with the marketing folks to make that happen.

I’m also thankful for everyone else that took part in the project in one way or another, everyone who supported me and everyone who shared in my enthusiasm and rooted me on (Chrispian Burks, Brandon Eley, Jared Smith, Stephan Segraves, Bryan Downing and others) as that truly meant a lot. I also have to thank every staff member at my communities that has been supportive of me and worked with me to accomplish the goals of those communities. My staff members helped me to reach this point. Everyone around me was optimistic and I was optimistic and… it’s happening. Cool stuff. It’s hard to describe. I’ll have to post the book’s acknowledgements up online so that I can properly thank everyone. But, thank you.

Well, I think this post is long enough. I have some more exciting news, but I’ll throw that into another post tomorrow or something. In the mean time, thank you for reading this one. I appreciate any and all interest in the book. If you know anyone who might be interested in it, please mention it to them. If you find an opportunity to blog about it or post about it somewhere, that’d be awesome and I appreciate it. If you want to review it for your site or publication (no matter how big or small), please let me know. Early reviews have been great (I’ll have to post the advance praise up soon) and I’m anxious to see how it is received in general. I hope that the book helps community administrators and I truly believe that it will. That’s all for now.

Very excellent! I will look forward to hearing more about this, and, of course, reading it!

I feel there has always been a lack of published resources available to help developers of online communities. It looks like your book will finally change all that, and due to your collaboration with a respectable publisher hopefully we will see an increase in the perceived legitimacy of people like us who develop communities online. Good luck, and congratulations!

Congratulations! You definitely deserve it after working so long and hard on this book. I can't wait to read it!

Thank you Jim, Mr. Reed and Brandon. Mr. Reed, I would love for the book to bring more perceived legitimacy to our profession. As you can see, I had quite a time getting a deal, but we persisted and AMACOM is a good sized publisher. I’m going to do my very best to make it a success and if it sells well, that may pave the way for more opportunities for people like us. I hope so, at least! Thanks again, Patrick

Excellent news, congratulations! Best of luck to you in the promotion phase!

Grats Patrick! Thats such great news and I can't wait to read it.

Thanks Brad (for the comment and the digg) and Ray. :)

Congratulations buddy! I'm excited to read the book. I can't even imagine how good it must have felt to hit the submit button on this blog post. When is the website for the book coming?

Great stuff Patrick, I can't wait to read it.

Thanks Bryan and Popular Wealth. :)

As a passionate advocate for community, I'm looking forward to reading your book. I've been looking for something like this and am curious what you have to say about the subject matter. Congrats on the book!