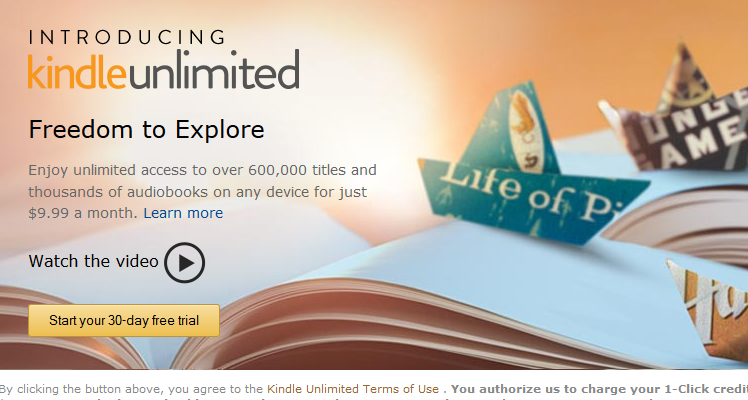 Kindle Unlimited, the “Netflix for Books” Model, and What Authors and Publishers Can Do to Stop It

Amazon launched Kindle Unlimited today, a “Netflix for books” style service which gives you access to more than 600,000 ebooks.

Before we go any further, I want to disclose that I am a published author with an agency that represents me. For my first book, I signed a traditional publishing contract with a good sized published. My second book was released for free via sponsorship. Finally, I am an Amazon shareholder.

It Makes a Ton of Sense for Amazon

When they entered video streaming, there was an entrenched leader in Netflix. Amazon has built up a formidable competitor, but Netflix is still the leader. When Amazon entered music streaming recently, they entered knowing that their catalog was vastly lacking, compared to many competitors. That’s OK because they launched it as an extra within the Prime subscription and you can expect it will grow, much like their video streaming selection has. Streaming music has its own entrenched leader in Spotify.

In other words, both times they launched from a position of relative weakness. They knew they would not be the leader – at least, in the foreseeable future.

This time is different. Amazon launches Kindle Unlimited from a position of strength in a very young vertical. Book subscription services for institutions have existed previously, as have educational subscriptions (like Safari, a joint venture between O’Reilly and Pearson that includes works from other publishers, to the tune of “thousands” of books). But the idea of a book subscription service targeted at the mainstream consumer has really only started gaining steam this year, thanks to Oyster.

Scribd and Entitle also play in this sandbox, though Entitle is more of a discount book retailer (you get to buy and forever own 2 books per month for $9.99).

Because of these factors, I expect that Amazon will instantly dominate this space and become the Netflix of book subscription.

No One is Talking About Piracy

A lot of people are talking about the pros and cons of Kindle Unlimited. Will it lead to increased or decreased revenue? Will it amount to less books sold or more? Will it devalue the work of authors in the eyes of the reader? All of these things are subjective. It’ll depend. I believe that some authors will be helped quite a bit while some might be harmed. But one thing that no one is talking about is piracy.

My friend Jonathan Bailey is a copyright and plagiarism consultant who started working in that space when, as an author, his rights were infringed upon. In April, he wrote that “Spotify has done more than any anti-piracy effort to reduce copyright infringement and music piracy.” Think about that for second.

You’ve probably heard some artists complaining about Spotify royalties. But a big issue with these complaints is that they compare it to how the music industry once was – and how it will never be again.

D.A. Wallach, Spotify’s Artist-in-Residence and himself a performing artist of note, has the job of trying to explain to artists why Spotify is a good thing – for them and for their fans. He has said that Spotify is trying to get people used to the idea of paying for music again. You see, many of the people who use Spotify (either for free while listening to ads or for $10 a month) are people who previously were paying $0 for music. They were pirating. The income generated from these people is income generated out of thin air.

Books are not music and movies. But they have plenty in common as a form of media people consume digitally.

What Publishers and Authors Can Do to Fight This

Nothing that will matter.

A serious push for a mainstream book subscription service was inevitable and there is nothing that authors or publishers can do about it. It makes far too much sense.

It’s a losing fight because if you think you can fight it or stop it – even if you get a bunch of buddies together – you can’t. For every author who declines to participate, 10 more will happily do so. For every publisher who might refuse, there will be a few ready to go, highly interested in a new business model. You just have to decide what side you want to be on.

I know what side I want to be on which is why, the moment I heard about Oyster, Scribd and Entitle, I emailed my publisher to ask them to put my book on there. If we don’t try new models, we don’t learn. I was grateful when they quickly released my book on Oyster and Entitle. Unfortunately, they refused to put it on Scribd. I’ve already emailed my agency to ask about having my book be available on Kindle Unlimited.

That doesn’t mean that some authors shouldn’t keep their books off of it or that it will make the most sense for everybody. I see it working much like Netflix does, as opposed to Spotify. New titles will be few and far between and it will be comprised of many backlist titles that were once popular and many books that were never popular (think of this as the equivalent of a made-for-TV movie from the 1980s that is now on Netflix).

I suspect that smart publishers and authors will be able to use it to their advantage. For example, do you have an author with a new book coming out? Push their backlist on a subscription service as a means of getting people interested in that person. I fully expect Amazon to make that possible for authors and publishers, to offer people the ability to buy an author’s latest work from within Kindle Unlimited.

Kindle Unlimited Can Be Stopped, But Not by Publishers and Authors

The only group who can stop the “Netflix for books” model is readers. That’s it. If readers use it, want it and demand it, then authors and publishers will look silly if they refuse to play ball. However, if readers don’t use it, if it is not successful, then we’ll have our answer. The model doesn’t work for books. Either way, the readers will decide.