I Won Nick or Treat! 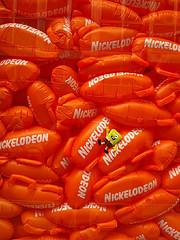 When I was growing up, Nickelodeon was probably my favorite TV station. I loved the channel and still do. It’s a highly memorable part of my childhood.

When I was at IZEAFest last year, I had an animated and highly enjoyable conversation with Ryan P. Thompson about old Nick shows like “All That,” “Doug,” “Kenan & Kel,” “Rocko’s Modern Life” and more. That conversation continued on Twitter where, somehow, I brought up that I had won Nick or Treat.

Nick or Treat was an annual giveaway that Nick would run each Halloween. The prizes would change each year, but in the year that I won, I collected a sleeping bag (that I had for many, many years), a plastic, glow in the dark Dracula model (that I never put together, but also had for many years) and probably a few other assorted things that I forget.

The way that you knew you would win is that they would call you on a certain day (it might have been Halloween) and you were supposed to answer the phone “Nick or Treat!” I’m thinking I was around 8. But, I remember it pretty clearly. I had picked up the phone a few times that morning to no avail – it had been my Dad or someone else. But, I happened to pick up the phone with a mouthful of peanut butter sandwich and it was someone calling to tell me I had won! I couldn’t talk, with the food in my mouth, so I handed it to my Mom.

I need to know more! How did it change your life! Did they give you a walk on appearance on Pete & Pete? Or let you dance on The Roundhouse? jk ;) It was awesome meeting you at Izeafest, and extremely nice to know that Nickelodeon had left as valuable an impression on others as it did to myself. I think somehow....through the television....Nickelodeon was able to detect your awesomacity (it's a word, and if it's not, it's going into urban dictionary), and knew that this conversation and article would follow years later. Wise choice, Nickelodeon....wise choice.

Haha, Ryan. I wish. :) I will say that Roundhouse was one of the early SNICK shows that I never really watched. Thanks for the kind words, Ryan. :) Was great to meet you, too. Thanks for the comment. Patrick

I also won this when I was a boy. Won a glow in the dark sleeping bag the model and like a years supply of Capri sun drinks. The good old days lol

I won Nick or Treat the SAME year you did! Because I remember also getting the sleeping bag and glow in the dark Dracula! I remember having to use super glue to put him together... and getting it all over me. The sleeping bag, if I remember correctly, was also glow in the dark. I also got a box of Capri Sun drinks --- do you remember that as well? I can't recall what else I got? My gosh -- that was a long time ago. When they called me, we were living in Hawaii at the time --- so with the time difference, I was asleep. My dad woke me up and said, "Nick or Treat is on the phone for you?!" I knew exactly what was going on... but was still half asleep.. and answered, "Nick or Treat?" I remember giving the phone back to my dad and going back to bed. :) I was pretty small at the time.. maybe 7 years old? :)

Very cool! You know, I don't remember that. But it's possible. I definitely enjoyed Capri Sun!

I won Nick or Treat as a kid as well! I can't remember what age I was or what the prize was, but it was petty cool for Nickolodeon to be calling a kid in a town with a population of 1500 people!

Nickelodeon.. I can't believe I spelled that wrong! Ha!