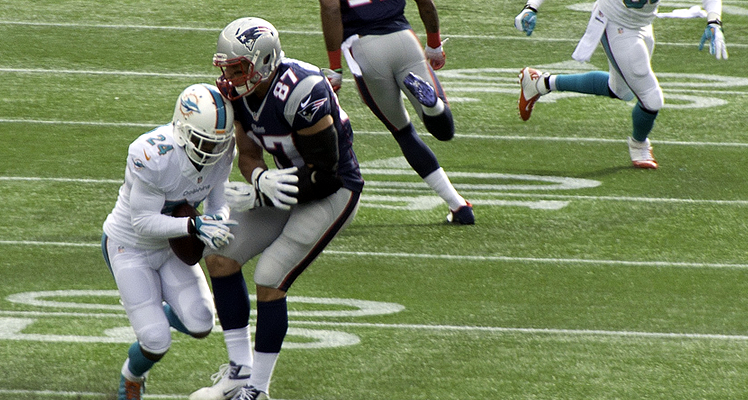 If you follow the NFL, you’ll know that my Miami Dolphins had a big, headline-grabbing scandal last year involving bullying. Specifically relating to members of our offensive line. There was a special report convened by the NFL that found three players responsible for consistent harassment: Richie Incognito, John Jerry and Mike Pouncey.

Incognito is gone, without a team. Jerry has moved on to the Giants. Pouncey, a Pro Bowler and the most talented of the three, remains in Miami.

Here’s a gift: Larry Granillo of Wezen-Ball.com has taken up quite the cool task: he’s going through the long history of the Peanuts comic strip and cataloging the the various baseball related numbers associated with Charlie Brown or, to be more specific; the wins, losses and some other fun categories, like the number of times Brown is knocked down by a line drive.

Stats aren’t the only thing, though: the posts read as a treasure trove of information of the baseball played in the series.

If anyone has an interest in fantasy football, we have a league going at SportsForums.net. Please feel free to check it out.

Former Yankee Bobby Murcer has passed away. Very sad. Awesome guy. My thoughts are with those who were close to him. Rest in peace, Mr. Murcer.

The YanksBlog.com team (me, Seamus Molloy and James Varghese) got together and came up with the top 10 Jason Giambi Mustache facts. We had a lot of fun doing it and I think it turned out great.

Have you heard about the sports media/blogosphere blow out that took place on Tuesday night on Costas Now on HBO? If you haven’t, definitely take a look at the segment on Deadspin.

Bob Costas set out to host a show, according to to program’s site, “taking stock of the sports media landscape, including the rise of internet bloggers and sports talk radio.” What a disaster.

They had a live “discussion” (major, major quotation marks around that word) between Costas, Buzz Bissinger, whose work I’ve never read (can’t say I’ve read much W. C. Heinz, either), Will Leitch of Deadspin and Braylon Edwards of the Cleveland Browns.

Right out of the gate, Bissinger launches into a tirade against Leitch. Not only that, but it’s really a personal attack with expletives pouring out of his mouth. I know this is HBO, but I would have really expected Bob Costas to have put together a professional program. This was not that type of program.

Hilarity ensued (for me) as Bissinger pulled out printed blog posts and blog comments from Deadspin and read them aloud. Of course, he pulled out examples that a lot of people would find a little offensive or odd. Deadspin has a certain personality. It’s what they do. Criticizing a particular blog is one thing. But, the problem with Bissinger is he took comments by Deadspin readers to equal EVERY BLOG POST MADE IN THE SPORTS BLOGOSPHERE. Apparently, he’s even serious.

As a sports blogger, I’m sure my reaction to watching this was similar to many others. Bissinger is just so out of touch that your mouth hands open, you laugh and you wonder what you can even say to a person like that. Do you just wait for them to die out and/or become extinct?

Blog comments are like letters to the editor minus the immediate control over what gets printed. Is every letter to the editor nice and vulgarity free? Of course not. Is every print article well researched and written? Of course not. So, then, do bad letters to the editor mean that every newspaper is trash? Does one article in one newspaper say something about every newspaper in the world? It’s insanity to take some of the more controversial blog posts on a blog like Deadspin and then say that this is what every blog is.

Simply enough – one person in one medium does not equal all people in said medium. Makes sense, right?

I thought Leitch handled himself pretty well considering that it was a total set up. He was getting it from all angles and Costas seemed to be enjoying himself, as well, playing Robin to Bissinger’s Batman. He deserves some of the same criticisms as Bissinger here.

The bottom line is that what they should have done is not just had the two extremes, represented by Bissinger and Leitch. Keep them, if you must, but also add a less controversial, widely respected sports blogger. Alex Belth of Bronx Banter is an example of one. And then, get someone in the media, like a beat writer, who blogs and have them on, as well. Peter Abraham of The LoHud Yankees Blog and Tyler Kepner of Bats would be examples. And if you want to get a player, please get one who understands the internet. Also, set some guidelines before you start. For example: “don’t tell your fellow panelists that they are full of anything.”

That would make for a more interesting discussion and I would like to see it.

Must reads: Peter Abraham’s take and Will Leitch’s first and second posts on this at Deadspin.

This week marks the first week of playoffs in the 3 fantasy baseball leagues that I am in.

This is a league I put together consisting of New York Yankees bloggers. It includes bloggers from YanksBlog.com (my site), River Ave Blues, Pride of the Yankees, NoSenseWorrying.com, Pinstripe Potentials and Pending Pinstripes. It’s a 10 team league with 6 playoff spots. I finished 5th. My team:

I had my first (and perhaps only) fantasy football draft last night. It was for a 10 team league. The positions are QB, WR, WR, WR, RB, RB, TE, WR/RB, K, DEF and then 6 bench positions. Here is the team I came out with:

Drafting Holmes and Bennett was insurance for my first round (third overall) pick, Larry Johnson. Drafting Anderson was insurance for my second round pick, Willis McGahee. I’m pretty happy with the team. QB is a bit of a concern, though. We’ll see how it goes, like always.

If anyone is interested in fantasy football, I have a league drafting on Saturday. For more, check out this thread at SportsForums.net. You need to have a SportsForums.net account and a Yahoo! account. Both are very easy to sign up for. :)

Anyone into fantasy basketball? I have a league drafting the 23rd, looking for a few people. :) If you have any interest, please e-mail. Thanks.