Congratulations to Dan Marino, my favorite football player of all time, on his enshrinement into the Pro Football Hall of Fame.

The greatest quarterback ever.

Dolphins Use Top Pick on Brown 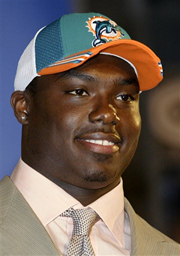 With 54 seconds left on the clock, the Dolphins selected Auburn running back Ronnie Brown. 6 feet, 233 pounds of (hopefully) great running back.

The Dolphins then picked DE Matt Roth in the second, ILB Channing Crowder in the third and CB Travis Daniels in the fourth. As I submit this, we’re X picks away from our fifth round selection. After that, we have only one pick left – in the 7th round (216 overall).

All in all, the draft seems pretty good to me.

Well, the NFL Draft is tomorrow. According to FinHeaven & Co, this will be the highest (2) that the Dolphins have ever picked. The previous high was 3 in 1970 where tight end Jim Mandich was selected. The highest pick they’ve had in my lifetime was 7 in 1992 where Troy Vincent was picked. To be honest, I was 7 and not paying a heck of a lot of attention…

Losing isn’t good, but it’s neat/exciting when your team has such a high pick. We’ll have anyone to choose from with the exception of one player. What will we do? Not sure. There are a a few trade partners out there. If we can trade down (keep a pick in the top 8), get another first rounder and more, I’m leaning toward doing that. There are really three things (with one of them possibly being gone after the 1 pick) you can take at that 2 pick. QB, RB or WR. WR (Braylon Edwards) is the least vital to us as we have Chris Chambers and Marty Booker. QB (Alex Smith) is next in line. We have A.J. Feeley, but he had his moments last year on a poor offense – I think that with a team around him, he has great potential based on the arm strength and spots of accuracy he showed last year. So, that leaves the biggest need, which is running back. Ronnie Brown is the consensus pick. However, at 2, that seems like it may be a stretch.

So, I’d like to see us trade down not any lower than 7 or 8 and then grab one of the three running backs and work on other spots. But, either way, it’ll be exciting and we should end up with one of the best players on the board.

Thanks to Stephan for bringing it up.

Owens did sign a seven-year deal for more than $46 million just last season. He did promise to be a model citizen for an organization whose owner once described it as the “gold standard.” He did say that his spats with former 49ers quarterback Jeff Garcia were an aberration, that his relationships with McNabb and coach Andy Reid would be just fine, and that the Eagles would benefit greatly from that.

There is a seven-year deal in place, about $46 million on the table, and an $8.5 million signing bonus that Owens already pocketed. But when that was noted, the first words out of Owens’ mouth were, “Tell me I didn’t earn it.”

That’s when it’s time to shut up.

He signed a 7 year deal LAST YEAR. Last year. Nuts. If it was a low ball figure, that is your fault. Let’s not forget, “his situation” in Baltimore was created by him. The reason he is in Philadelphia is because he wanted to go there. Maybe Baltimore would have given him more money? I don’t know. At any rate, it is by his doing. Honor the contract.

“I said what I said because, obviously, somebody in the organization is leaking stuff to make me look bad, to turn the city against me. Now, why do that now? Think about that. Think about where it’s coming from.”

Yankees Fans: Give Womack a Chance

Yankees fans… now, I know some of you don’t like Womack. For whatever reason this may be – as I posted at Bronx Banter – it’s time to give him a legit shot.

So far, I like him. Soriano he’s not. But, Cairo he can be. He is the weakest bat in our lineup like Cairo was the weakest bat in our lineup. Just because we have a 20 HR guy at 8 positions instead of 9 doesn’t mean we should act spoiled. (HRs isn’t the greatest example because I’d rather have a guy who can hit for average and play smart, like Jeter, but it’s the one stat that came to mind).

Give him a shot.

So, the 31st best team gets the hardest schedule. Score! :)

Good to see Tiger back in the winners circle at a major. That chip in he made was one of the most amazing golf shots you will see. I was feeling this could be a good year… looks like it might be. I watched the last 5 holes or so. Exciting, good stuff. Felt for DiMarco.

I get various e-mails from users contacting me through MarianoRivera.com. Mostly good, some bad (one guy said he should rot in you know where). I generally disregard the bad ones and especially don’t respond to anything inappropriate. But, I got an e-mail from a guy and I felt compelled to defend Mo.

The summation of the e-mail was:

Ever since he made that error against Arizona in the 2001 World Series, he has been a different pitcher. He’s been throwing batting practice. I love him but it’s tim for him to go. With a 1 run lead in the bottom of the ninth, we can’t call on him anymore. He can’t get it done, especially in the big games

So, I felt compelled to respond. And here we are:

Thank you for your e-mail.

I’m not too sure why you are sending this in to a Mariano Rivera unofficial FAN site, but I can only say that we disagree. Since that throw you mention, his ERA in in regular season (including this year) is 2.10, which is pretty much the same as it’s always been. Things happen, this is life… people adjust, teams adjust. Especially when you see him so much. Circumstances don’t go your way. Players make errors. No one is perfect. And other worldly performance cannot be expected, only appreciated when they happen. This goes for the greatest players in the history of the game at any position, of which Mo can certainly stake a claim.

These numbers paint a picture that doesn’t support your statement. If you want someone better than 2.10 in the regular season and 0.60 in the postseason (which I doubt any other pitcher who has pitched as much as Mo has done in that span), that’s fine. Take Eric Gagne or Brad Lidge, if you want. Take today’s “hot” ones. But, you won’t get what Mo gave us in his prime in their prime and I doubt you’ll get what Mo can still give us.

Some good writing by Cliff Corcoran at Bronx Banter.