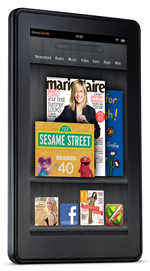 I use other apps, do some web browsing, listen to some music (through Amazon Cloud Player) and more. It’s addictive to check Amazon’s Appstore for Android to see what the free app of the day is and to see what is on sale.

I love it. It runs well, it’s quick and responsive. It looks great. It does what I expected. More on that in a second.

It’s getting beat up a bit in the press (David Streitfield’s piece for The New York Times is getting passed around a lot right now) and I agree with some of the criticisms. I run into small issues here and there. The inability to customize the items on your home shelf is an obvious one. The volume doesn’t seem to go up particularly high (a limitation of the speakers, I assume, which are then limited by the cost of the device). The power button is easy to hit. And there are some other things. They are small and don’t really bother me personally.

Amazon plans to release an update to the software soon that will address some of the issues.

But, I feel like some of the criticism is overblown. When Jakob Nielsen says that he feels it will be a “failure” and that if Amazon doesn’t correct this “failure” in the next version of the device, that the device will be “doomed to the dust pile of history,” I believe he has a flair for the dramatic. And, also, I apparently am really loving what is a failure.

Nielsen writes, in his review of the device’s usability, that if 7 inch tablets only sell a few million units over the next year or two, that the “platform will either die or be reduced to serving poor people who can’t afford a full-sized tablet.” I love failures and am poor. I’ll take that. Nielsen does raise some good points about usability, of course. I will admit that my fingers aren’t terribly wide.

But, I would also say that Nielsen is a usability expert and reviews the device from that perspective. I respect him. How can you not? But, a usability review is not the same as a consumer review. While bad usability affects consumers, certainly, I am not sure that his review is really reflective of how the market will embrace the device. Time will tell.

According to the Times piece, analysts have been estimating that Amazon will sell between three and five million Kindle Fires just this quarter alone.

Let’s bring it back to what I said above: it does what I expected and it does it well. I expected to be able to watch video from Amazon’s library and from the web. And I have. I’ve been surprised by how much it has done with little wifi in some cases.

I expected to be able to play games, to do some light web surfing and text entry. And I have. The keyboard took a little getting used to, but I’m surprised by how accurate I’ve become with it. And, though my fingers are thin, I was surprised the other night by how accurate I was ,while lying sideways in bed with it, without really trying. It was pretty forgiving.

Though calling it an iPad killer is a bit much, it is definitely a threat to the iPad because it presents people with a readily available alternative, depending on their individual needs. If they must have features the Kindle Fire doesn’t, then the iPad wins, if they aren’t poor. But, if they don’t need that camera or mic or don’t care, then the iPad becomes a more viable option and if they’d rather save a few hundred dollars, as well, it becomes an even more viable option.

It’s not perfect, though nothing is. It has the occasional quirk that I will note before simply moving on. Nothing that has really frustrated me, though.

It’s already given me a ton of enjoyment. I use it most nights before I go to bed, watching this show or that show and randomly throughout the day. I am exercising more because of it, too. Time on the elliptical just flies by.

I love it. I really do. Not just because I love Amazon, but because it delivered value to me and that is what I care about.

Here's how I look at it. For $200, does it provide me more usefulness, dollar per dollar, than a $500 iPad? I suspect the answer is yes. Even if it only does half of the things you'd want on an iPad, it's still a better deal. I would remind the commentators that doing a value comparison and getting the purchase that provides the best bang for your buck is NOT just for poor people. You don't get to be a billionaire by wasting money. If a $200 tablet does what you need, there's no reason to buy a $500 one, end of story.