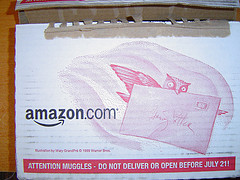 To see the final movie, it was an emotional thing. Not just because the movie has highs and lows, but because of that passage of time and because this is the final chapter of the story. As with any form of series based content that touches people, there is always a sense that, as long as there as a book or a movie or an episode left to see or consume, it was not over. But, this is it. It’s over.

The film itself was wonderful. I really enjoyed it. To me, the whole series has been wonderful and has proven to be a constant source of happiness and enjoyment. I’m not much of a critic. I listen to music, I watch movies and television, I read books to enjoy them. And I enjoyed Harry Potter. I’ll miss the feeling of “what’s next?” But, all good things must come to an end.

Congratulations to J.K. Rowling and everyone involved with the publication of the books and the creation of the films. Thank you.