Common Sense is All You Speak About, Can You Talk About Something Different? 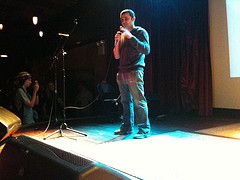 Sometimes, in reference to someone’s writing or a speaking engagement or some sort of content, a reader might say “well, that’s common sense.” As if that’s a bad thing.

Common sense is a funny thing, for two reasons:

This post was partially inspired by a Twitter conversation on Gary Vaynerchuk’s stream. I don’t recall the exact conversation, but someone had said that he wished Gary would talk about something else, how he talks about the same stuff, etc. And Gary responded with something along the lines of “I can only talk about what I know” or “I have a message to spread” or something like that.

And I think that’s a good point to remember. Yeah, I give different talks on different subjects and have yet to give the exact same talk twice – though my talks have certainly overlapped. But, that’ll change. If you attend a talk by a speaker that sounds like the same talk you already heard by that speaker, based on the title alone… well, that’s not really the speakers fault, is it?

Finally, common sense isn’t a bad thing. If I’m giving a talk and you’re already on board with what I’m saying and feel like you can get nothing from my talk, my talk is not for you. It’s for the people in the room that don’t already know what we know.