Well, my new toy came a couple of days ago. I have been playing with it as I have time and I like it. Very neat. My entire CD collection x 9.5 can fit on it. AWESOME!

Not too much to blog about lately, as you have seen. :) Sorry…

I’m not playing too much AA as I am pretty busy right now, but I did hit 30 honor about a week ago, so that’s something…

Well, it’s over. I guessed right and Shawn won. Overall, it was a pretty good show that I enjoyed watching.

But, after those 3 months, IF Shawn has done an outstanding job, Shawn will be named President of a new to be determined Virgin company and be given an equity stake in it. He also got 1 million dollars. A pretty cool prize – but, not exactly what we had been led to believe. You can read more at Reality TV World.

I did a little look around and found that Shawn has a personal website, featuring a blog. Also, if you look down and to the left on his blog, you can find links to all of the cast member sites.

Well, I watched a good bit of the Randy Johnson press conference. Went well. He looked and sounded very good. Gets you excited, for sure. I loved this quote:

“I will have at least 35 starts here. I will pitch a lot of very good games here, I can tell you right now. I will probably lose at least 1 game, 2 games this year. I’m not gonna go undefeated.”

The Channel Two (Duke something or other) guy seemed to be a bit of a stooge. Randy made a mistake, he apologized profusely. It wasn’t really that big a deal. If he punched you and beat you up, that’s a big deal. The guy gets a chance to ask a question at a major press conference and that’s what he asks? Jump in a lake and enjoy your “claim” to fame.

Well, The Rebel Billionaire ends tonight. I don’t watch hardly any reality shows – or shows, at all, really – but I have managed to watch this one from beginning until (hopefully) end. Anyone else watching it? Who do you think is going to win?

I thought Shawn was going to, but with the way Richard (rightly) pointed out some of the things he had done, I am questioning it. Still, I think he is closer to Richard, so I will guess that it will be him, in the end. But, we shall see…

A few years ago, I was a member of the BMG record club. It was great. There weren’t the newest CDs, etc. but all CDs would eventually make it AND they had a great selection of older ones. For instance, I like Will Smith, so I was able to get almost all of the DJ Jazzy Jeff and Fresh Prince CDs, which was great.

But, it seems times have changed. I have been looking at the record clubs that are out there (BMG and Columbia House – is there anyone else?) and it looks like selection has gone downhill. For instance, BMG has 0 P. Diddy albums (although I own them all, I am using this as an example) and I think either 0 or 1 JJFP albums. It kind of stinks. I’m not sure when or why it happened. Maybe something to do with consolidation in the industry? I wanted to get the Bad Boys 2 Movie Soundtrack (it has been out for 1 and 1/2 years, so I don’t think its too new!) and can’t find it at either. It stinks.

Anyway, does anyone know of any other record clubs besides those two? Would like to hear of them.

Ruben Sierra re-upped with the Yankees yesterday, taking less money to stay with a team he loves. …

Sierra, 39, signed a one-year, $1.5 million contract, declining deals for option years with multiple teams because he’s happy in the Bronx.

“He’s very appreciative for getting the opportunity Mr. Steinbrenner has given him there in New York,” his agent, Chuck Berry, said. “He likes Joe Torre. That has been a very good relationship in the last couple years.

“Being on a winning team is important as well. So is the comfort level. Put it all together, and it pointed in the direction (of the Yankees).”

“We’re happy to have Ruben back,” Cashman said. “He’s a quality player off the bench for us. And at times during the regular season he becomes even more than that for me.

I’m glad to see Ruben back. I enjoy watching him play. He’s not the best at anything, but he’s a pretty good guy to have. I dubbed him Old Man October this past postseason. Not neccessarily because his numbers in the postseason are particularly awesome (they are alright – and he had a big, big HR against the Twins in the DS), just because it sounded cool. :) 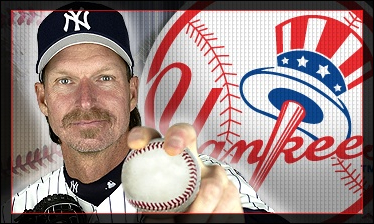 My Nerd Score and Digital IQ